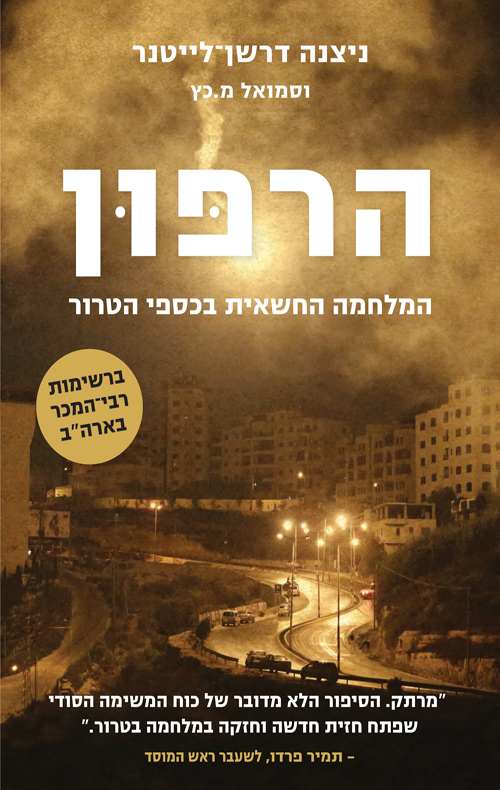 In 1990s, when groups like ISIS were bringing in billions of dollars to finance their attacks, and Iran was bankrolling its proxies Hamas and Hezbollah with an endless flow https://news.google.com/articles/CBMiYWh0dHBzOi8vaGFtb2RpYS5jb20vMjAyMS8wOS8xNy9jb3VydC1vcmRlcnMtaGFtYXMtdG8tY29tcGVuc2F0ZS1mYW1pbGllcy1vZi10aHJlZS1tdXJkZXJlZC10ZWVucy_SAQA?hl=en-US&gl=US&ceid=US%3Aen of cash, a small and covert group of intelligence operatives spearheaded a dynamic new front to combat terrorists by depriving them of the oxygen they require to breath: the money needed to carry out attacks.

This is a story of a pioneering and innovative method of fighting terrorism—financial warfare waged against the extremist organizations, their leadership and the rogue regimes that support them. https://news.google.com/articles/CBMifmh0dHBzOi8vd3d3LnBybmV3c3dpcmUuY29tL25ld3MtcmVsZWFzZXMvc2h1cmF0LWhhZGluLXByZXNpZGVudC1yZWxlYXNlcy1hbWVyaWNhbi1iZXN0LXNlbGxlci1oYXJwb29uLWluLWhlYnJldy0zMDExOTc2MTkuaHRtbNIBAA?hl=en-US&gl=US&ceid=US%3Aen It began in Israel, the small and embattled nation that has become fabled for its cutting edge hi-tech creativity and the prowess of its espionage services. This is the untold tale of perhaps the greatest and most disruptive Israeli start-up of them all.

Darshan-Leitner, President of Shurat Hadin and Katz introduce Meir Dagan, a legendary soldier and spymaster, who spent a lengthy military career serving Israel in the up-close-and-personal world of deadly special operations ultimately becoming the director of the Mossad, the Jewish State's famed espionage service. Dagan's reputation was that of a warrior, a man who moved silently behind enemy lines with a dagger between his teeth. But as a commanding general frustrated with the limitations and inefficiencies of the conventional approach to warfare that failed to stem the waves of bus-bombings and suicide attacks,  Dagan sought novel and imaginative strategies. He pieced together an outside-the-box solution to target the source of the terrorists' power, a complex underground economy of "blood money" that enlisted banks and charities to distribute funds to the diabolical masterminds behind the catastrophic attacks. Dagan assembled a dream team of specialists from the intelligence services, the IDF, the National Police, and even Israel's IRS, to fight the ever transforming terrorists groups and their money across the Middle East, South America, Africa, and around the globe.